In our modern life style it is perfectly normal to go to the supermarket for some meat and veg, slice them in bite-size pieces and then X these in a wok or saute pan. When you think about what should come in the position of ‘X’, it is obvious we need a special verb here. We can’t use ‘roast’, ‘boil’, ‘fry’ or simply ‘cook’. These all do not sound right when using a wok. We need a special word to describe what we are doing when we are holding a spatula and preparing something in some hot oil in our woks, a verb which in Chinese is called ‘chao’ 炒. 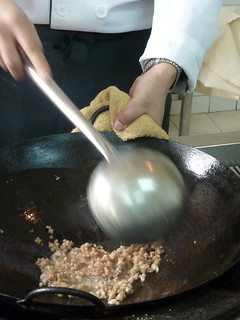 炒
The character for ‘chao’ shows the ‘fire’ radical on the left and then several strokes on the right, which at a closer look, could really resemble a hooked spatula with some edible chunks to either side, scraping the tilted bottom of a wok. And ‘chao’ing is actually that: scraping and stirring ingredients to cook evenly.

The Chinese word is not hard to translate, in fact we all know how to: it is called ‘stir fry’. This term has spread everywhere, from professional kitchens to ordinary homes and has been widely accepted throughout the past twenty years, when both the usage of a wok and the technique of stir-frying became mainstream in our everyday cooking routines.

Just going to the supermarket will prove this point. Marketeers and food companies have embraced the use of the word ‘stir-fry’ and have created all kinds of new words and combinations. The first combinations in which we find ‘stir-fry’ is in ‘stir-fry oil’, ‘stir-fry seasonings’ and the popular ‘stir-fry sauce’, for example on a package of ‘black bean stir fry sauce’ or a jar of ‘Kung Pao stir-fry sauce’. Another appearance of the word ‘stir-fry’ is in prepackaged bags of sliced vegetables or meats. Stir-fry here stands for ‘using in a stir-fry’. We found ‘British pork stir fry’ in the meat section and both in the fresh and deep freeze sections products like ‘stir-fry vegetables’, ‘vegetable stir fry pack’, ‘stir-fry mix’ and also a ‘stir fry vegetable medley’.

So the ‘stir-fry’ combo can refer to either Chinese, Japanese, Thai or other Asian flavourings, or to ingredients which are sliced in bite-size pieces for quick and easy preparation. Instead of ‘stir-fry’ the word ‘wok’ is used, in for example ‘wok seasonings’ and ‘wok sauce’, or even the tautological combination of ‘wok pan’. A wok can be referred to as ‘stir-fry pan’, go check the Amazon.com kitchen department and you’ll see.

So when exactly did the word ‘stir-fry’ enter the English language? Don’t we need a wok first before any stir-frying can take place? And did these woks come to America or Europe, along with the first Chinese and their restaurants ?
The answer to this riddle turns out to have a very clear and definite answer. The word ‘stir fry’ was used for the first time in the 1945 cookbook How to Cook and Eat in Chinese by the author Buwei Yang Chao 楊步偉. The word was invented by Yang’s husband Yuen Ren Chao (趙元任), an American linguist who helped devising the Gwoyue Romatzyh transcription system and worked for the dictionary project of the Harvard-Yenching Institute. Yuen Ren Chao loved translating and playing with word puns and meanings, proof of which is his translation of Lewis Carroll’s ‘Alice in Wonderland’ into Chinese, including the notoriously difficult poem ‘Jabberwocky’. 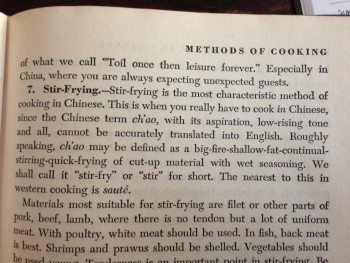 Hu Shih says in his foreword to Mrs. Chao’s cookbook that he ventures to predict that “some of the new terms like “Defishers”, “Stir-frying”, “Meeting”, “Plun-ging”, and a host of others [..] will come to stay as the Chaos’ contributions to the English language”.*
And how right he was. ‘Stir-fry’ (and also pot-sticker for guotie /gyoza) have survived to this day. Stir-fry as a term is thriving as never before. From stir-fry, ‘chao’ is translated into Dutch as ‘roerbakken’ and this word made quite a surprising career there too – something which we will elaborate on in a Dutch post on this subject.

Reading Chao’s delightful cookbook makes one want to try out many of her dishes. And we love all the other made up words by Yuen Ren Chao. I’ll give you my favorite, which I think should be used in the English language as soon as possible please: wrapling. Wrapling! It’s so simple and clear, one can almost guess what it means. It is what we call Chinese dumplings, little skins of dough with a meat or vegetable filling. Wrapped one by one, hence wrapling. Shall we stir-fry some wraplings from now on?

Returning to the wok and stir-frying, it looks as though stir-frying is slowly drifting away from Asian flavours to become a cooking technique in its own right. This can be seen in the example of ‘stir fry pizza’. Pizza? You must be as surprised as I am. How can pizza and Italian cuisine have anything to do with stir-frying or Asian cooking? Is some fusion-crazed person stir-frying pizzas, in slices perhaps ? And what kitchen utensils can tackle this job, surely a wok or at least a ‘stir-fry pan’? Well, I tell you what I found. It means one prepares a pizza dough (either fresh or from frozen) and then tops it with a stir-fry of vegetables or meat, which are stir-fried in a wok beforehand. The pizza with these toppings is baked in a hot oven until ready. Let’s welcome the Kung Pao Pizza.

Like Loading...
By kattebelletje in blog on September 19, 2014.
← The global lives of food and material culture ‘A viscous savoury juice’ →