In 1912 Francis Bernard Aubrey Le Blond (1869–1951) travelled by boat to China, Korea and Japan, and returned to Europe by Trans-Siberian Railway via Russia [1]. His pioneer wife, the mountaineer and photographer Elizabeth Alice Frances Le Blond (1860–1934), accompanied him [2]. 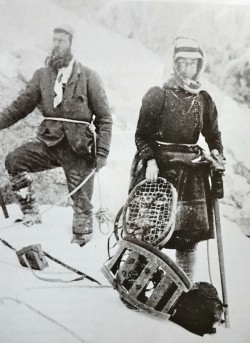 Elizabeth le Blond was an extraordinary woman who gained fame and notoriety at the same time. Women climbing mountains was unheard of, and Mrs Aubrey le Blond outraged London society for having caught the sun on her face and climbing mountains in trousers rather than a skirt [3]. She wrote numerous books, detailing her adventures in the mountains and giving advice to other woman climbers. Her autobiography, entitled Day in Day out and published in London in 1928, however, has only a short chapter on their trip to East Asia. Travelling as they did in 1912, they observed a great deal of the devastation from the 1911 Revolution, but she also observed that the old ceramics her husband wanted to purchase were going cheap, as the ‘officials of the ex-Emperor’ were selling their off their collections as they were now ‘out of office and poor’[4]. Her husband was a far less colourful figure, and might perhaps have disappeared entirely from the annals of history, had it not been for his donation to the Victoria and Albert Museum of the porcelain he purchased during his 1912 trip to Korea [5].

In 1918, the Museum published a catalogue of the ‘Le Blond collection of Corean pottery’, listing 145 numbered items, as well as a stone chest and a memorial tablet.

The wares are divided into three separate sections: ‘Indigenous Corean wares’, ‘Wares of Uncertain Origin: Corean or China’, and ‘Imported Chinese Wares’. In the early decades of the twentieth century, much of this was uncharted territory, as is clear from the heavy use of words like ‘undated, ‘uncertain’, and ‘unclassed’ in the table of contents alone. Our understanding has improved at least to such an extent that what once was undated, uncertain and unclassed, can now, mostly, be identified much more specifically. Perhaps more interestingly: Le Blond found these items all in Korea. From archaeological findings, including maritime archaeology, and new readings of the documentary evidence, it has become clear that there was a thriving exchange between China and Korea during the tenth to fourteenth centuries [6]. Many of the items in Le Blond’s section ‘Wares of uncertain origin’ had in fact been made in China, as did numerous of the items Le Blond had confidently identified as ‘indigenous Corean wares’. Chinese stonewares and porcelains were in high demand in Korea, and, as we now know, gave new impulses to the ceramics industry in Korea, as we see from the stunning objects in Figure 1 [7].

Le Blond’s early collection illustrates the long history of the exchange of goods between China and Korea. What the objects themselves do not show, and what Mr and Mrs Aubrey le Blond did not see, is the context in which they were traded. To be more precise, the bowls do not show what may well have been consumed from them, namely: tea. The exchange of tea between China and Korea goes back further than the twelfth century: the trade in tea, salt, silk and horses drew the mobile tribes in the northern steppe lands together with the sedentary states in what we now refer to as Korea and China together as early as the ninth century. The seventh-century tomb, located in what is now North Korea, in which the image in Figure 4 appears, shows a knight drinking tea together with two ladies. The round teapot and the individual bowls in various sizes suggest an already highly sophisticated material culture associated with drinking tea.

The cups we started with, bought by the enterprising couple Le Blond, the initial lack of clarity about the tradition to which these cups ‘belong’, and the consumption of tea in the North Korean tomb of the 6th century all suggest the possibility of ‘shared taste’. The idea that cultural practices such as the production and consumption of tea and the manufacture of beautiful cups from which to drink this tea is associated with a single nation state (i.e. China) is misguided. Instead of boundaries, we see connections, interaction, and exchange, and the possibility of a shared taste emerging across north-east Asia before the twelfth century.

By atgerritsen in blog on May 11, 2015.
← High diplomacy and a humble bean Prinsenhof shards →