Pasta’s global story: Françoise Sabban on the contested history of noodles. A lecture for Shared Taste at SieboldHuis, Leiden

In April 2016, we had the great pleasure of hosting the eminent French food historian Françoise Sabban. Professor Sabban is professor at the École des Hautes Études en Sciences Sociales in Paris and member of the Centre for Modern and Contemporary China Studies. She is one of the foremost scholars of food history in Europe, and the most eminent historian of Chinese food history. It was a great honour for us to host her in Leiden; her presence was an inspiration, and her lecture was an overwhelming success.

One of Françoise Sabban’s best known publications is Pasta: The Story of a Universal Food, a book written with her husband Silvano Serventi, and published by Columbia University Press in 2002.

The book starts at the very first beginnings of the history of pasta, with the early cultivation of wheat in the Mediterranean, and goes on to cover its artisanal heritage, the golden age of its manufactory, pasta in the industrial era, and the various ways in which pasta is part of global diets. One of the final chapters of the book tells the story of ‘pasta’s other homeland’. As Sabban writes there, the Chinese ‘were familiar with wheat-based pasta long before the Europeans’. She covers the history of 餅 bing, a term that later has come to mean only flatbreads, but which should be understood to refer to a pasta product. This chapter laid the foundations for our understandings of the very key role of the noodle in China’s culinary past.

The lecture Sabban gave at SieboldHuis on 22 April 2016, developed these ideas further. She made very clear from the outset that the controversy alluded to in the title of The Disputed Issue of the Origin of Noodles has nothing to do with the age-old question about whether Marco Polo’s familiarity with Chinese-style noodles explains the appearance of spaghetti in Italy; when he returned from his travels in 1296 pasta was already there. Of course the emergence, transmission and development of culinary practices can never simply be reduced to a single individual.

The contested element in the history of noodles, in fact, goes further back than Polo’s travels. Sabban asked why it was that wheat was the most significant cereal of the Mediterranean world, yet noodles did not emerge first in the Mediterranean but in northern China, where in fact millet was the main cereal.

Her talk began with the European part of the story. In the Greco-Roman world, there were two types of wheat products: bread (grains cooked in dry heat) and gruel (grains cooked in water, like porridge). There was also a sharp division between leavened and unleavened doughs (i.e. without yeast). Unleavened dough was considered harder to digest. Pasta was seen as hybrid within that categorization: to make pasta from wheat, the grain had to be kneaded, like bread, but then it was cooked in moist heat, like gruel. Sabban argued that this left no place for pasta, indeed, she put it even more bluntly: since pasta is an unleavened bread, pasta was ‘unthinkable’.

Words like tri, tria, itri, itriyya, and itrium (‘noodles’) demonstrate the presence of noodles in the Sicilian trade of the twelfth century. Pasta was made from semolina which was generally dried before cooking. In both the Jewish and Christian traditions, bread was considered to be sacred. Before baking, a little piece of dough was taken off the dough and given to the priest for blessing. Itrium, which did not receive a blessing and was not passed over a fire, was thereby expelled from the sacred realm, and considered profane.

In the case of China, the earliest references in Chinese sources refer to wheat or barley. The word 餅 ‘bing’ [pasta] appears in a dictionary of the second century AD, the Shuowen jiezi 說文解字, where it refers to ‘a (millet) cake made of wheat flour’.

Another early reference dates to 168 BC, when it appeared in medical treatises written on silk found in the Mawangdui tombs. They refer to bing [pasta] as a verb: bing zhi 餅之 ‘bing’ it, meaning: shape it in the form of ‘bing’.

This detail from a wall painting discovered in a tomb in Yangqiao, on the outskirts of Beijing, shows a woman kneading. The tomb has been dated to 937-58. 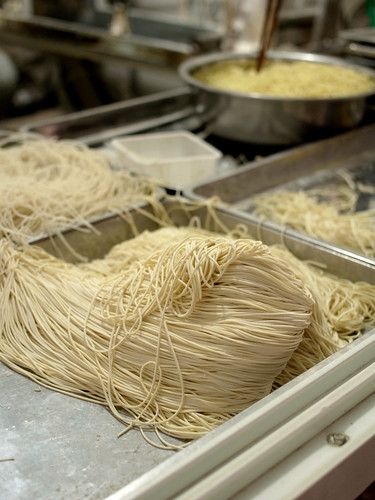 Wheat was just a special food substance, a pliable dough to be boiled or fried. This meant that in China, there were no limits to the creative imagination concerning wheat doughs. There were no battles over symbols between leavened and unleavened bread, nor was there a polarity between the fermented and non-fermented foodstuffs. This led to several inventions of technical processes which made it possible to make noodles from starch mixtures, making kneading unnecessary.

Would you like to be kept updated on Sabban’s latest research on this matter, please visit : http://cecmc.hypotheses.org/7663